The Evolution of a Profession

Believe it or not, the history of the financial planning profession actually began in an airport. The year was 1969, and a small group of financial services professionals had gathered in Chicago to talk about how to help Americans take better control of their financial lives. That historic meeting led to the creation of the CERTIFIED FINANCIAL PLANNER designation, and an eventual movement to establish financial planning as a distinct profession – similar to medicine or law.

In 1973, when the first CFP professionals (and there were just 42) received their certification, they had no idea they were at the forefront of a revolutionary way of thinking about personal financial planning – an approach that was holistic, comprehensive, and client-centric. In the years that followed, the quest for CFP certification expanded well beyond the United States – first to Australia, then to Japan, then to 15 more territories around the world.

In the early 2000s, CFP Board, owner of the CFP marks in the U.S., agreed to the creation of a new entity to set global standards for financial planning and administer CFP certification internationally. Financial Planning Standards Board began in 2004 as a 501(c)(6) nonprofit organization, and assumed ownership of the CFP marks outside the U.S. FPSB now has member organizations in 27 territories, and the number of CFP professionals worldwide is more than 203,000. 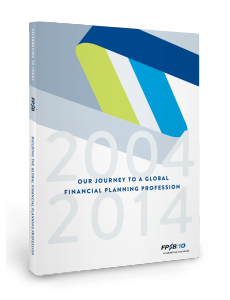 Our Journey to a Global Financial Planning Profession

Read about the birth of CFP certification and the creation of FPSB in “Our Journey to a Global Financial Planning Profession,” a 140-page book chronicling the evolution of financial planning.

Get to Know Us Better

Meet the many volunteers and staff who contribute to FPSB’s success in this video, created in celebration of FPSB’s 10th anniversary.